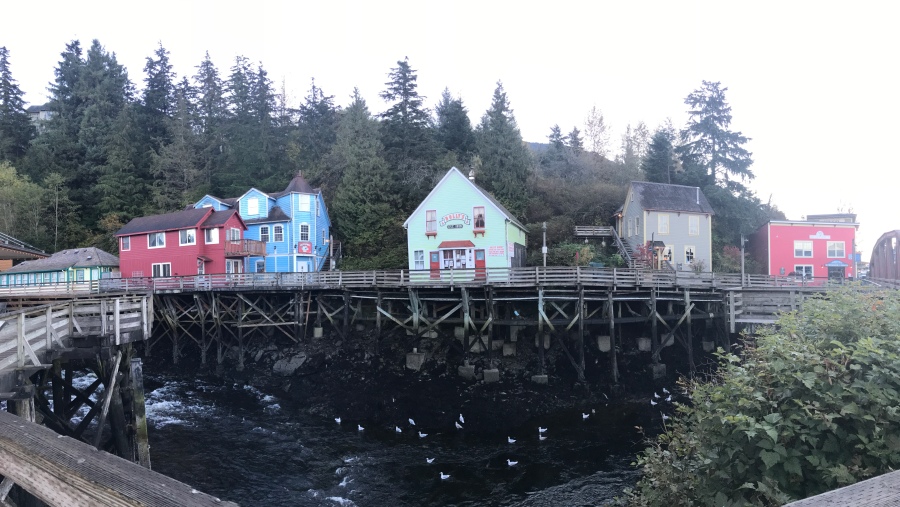 It’s an odd place, Ketchikan. At least it is in early October. The cruise ships have ended their season and the town returns to the residents.

The skies were grey for the entire duration of our visit, as if to warn us away. The locals met us with a mixture of curiosity and suspicion by the locals. They couldn’t understand what two young people could be doing in their little town as independent travellers. We were asked more than once if we’d missed our cruise ship home. Saying no and that we were Australians seemed to be a valid enough explanation for at least half of them.

We stayed in a guest house on Creek Street, because everything else was closed for the season. It was a creaky, old weatherboard building that served as a dance hall and Alaska’s first registered brothel before it was closed in the 1950s. Creek Street is full of these aging wooden tributes to the past, sitting in a wonky line along a rickety boardwalk, held up on criss-crossed wooden stilts.

They stand like aging movie stars past their prime but too proud to step aside. Tarnished metal plaques on their outer walls bear their names – Star House, Preacher’s House, June’s Place. heir bright colours stand out against the grey sky – mint green, sky blue, salmon pink.

Salmon. The perfect Alaskan stereotype. The creek is full of them. Walking the boardwalk at dusk, when the sky is turning pink and the air is still, there’s an acrid smell of gutted sea creatures. It reminds you of the end of the day at a fish market. The water in the creek rises and falls fast, faster than many of the salmon can keep up with.

When the creek water falls at the end of the day, you can finally see what lies beneath. Below the wooden stilts of the boardwalk, a vicious valley of jagged rocks appears. And caught up the are the salmon. Dozens, maybe hundreds of them.

Things started moving too fast for them, and they’ve gotten themselves stuck as the tide falls back out. And just as you’re processing the savage fate of the fish, the seagulls sweep in like vultures. They pick at t as they lay helpless in their death throes.

That’s life. Sometimes things change too fast for us to keep up, and we stumble. Occasionally, there will be those who come along when we’re most vulnerable to pick at our wounds. Shit happens; we mess up and we get stuck. But we’re not victims of the tide. If we’re paying attention, we know when we’ve messed up. And if we can mess up right, we get the chance to learn something from it, save ourselves, and keep on going.