Fun fact: I’m a huge Harry Potter fan. I remember watching Harry Potter and the Half Blood Prince and being absolutely stunned at the cave Harry and Dumbledore battled it out with one of the horcruxs in. Everything about the setting (other than the magical zombies) was stunning. I also remember a few days finding an article online with a list of places around the world that were “Harry Potter inspired locations,” and Giant’s Causeway was on that list. The more images I looked at, the more I knew I needed to see if for myself some day.

When we added Dublin to our itinerary, we decided to add a day trip out to Giant’s Causeway. It was going to be a long trip, but if I was that close, I couldn’t really pass up the opportunity. And the selling point to husband was the Old Bushmill’s Whiskey Distillery close by. We vetoed the overpriced, big group, organised 15 hour day trips we saw online and decided to just hire a car and do it ourselves. 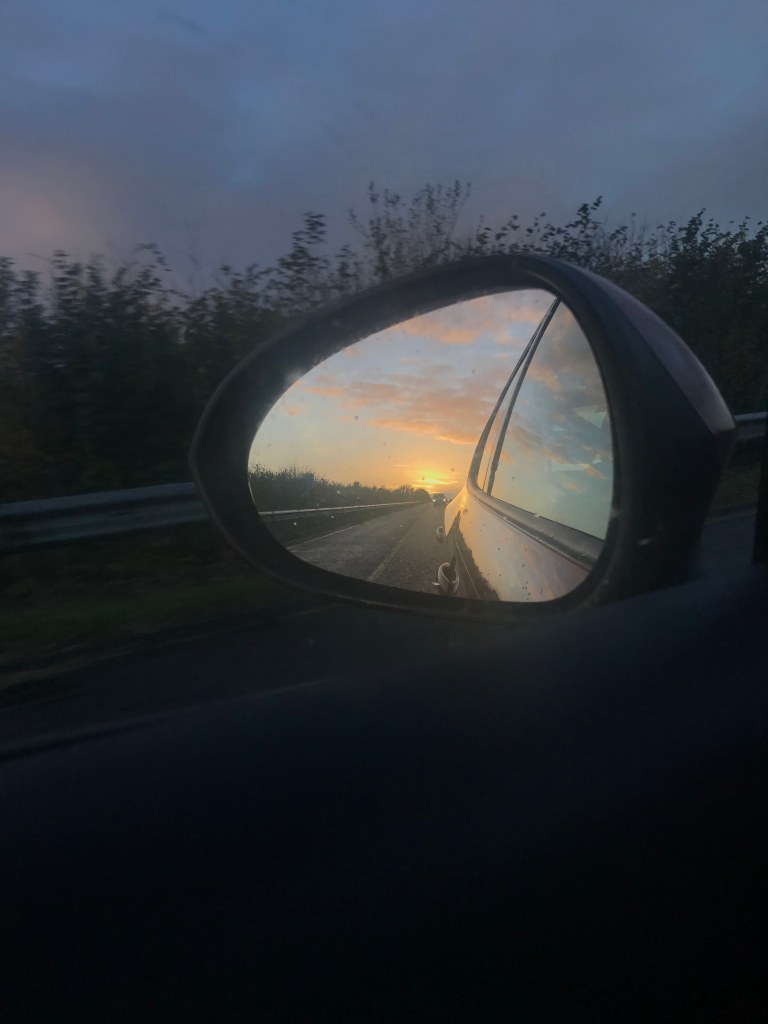 The more I looked into it and trying to find other stuff in the area (so I could justify hiring a car and spending the day driving all the way there and back), the more my inner nerd got excited – turns out there’s a few Game of Thrones filming locations on the way, too!

Long story short: some rotten weather meant we had to adjust our plans a little and miss a few stops, and Giant’s Causeway actually wasn’t all it was cracked up to be, but we still had an awesome day and would definitely recommend the DIY route over the group tour. Here’s how to do it… 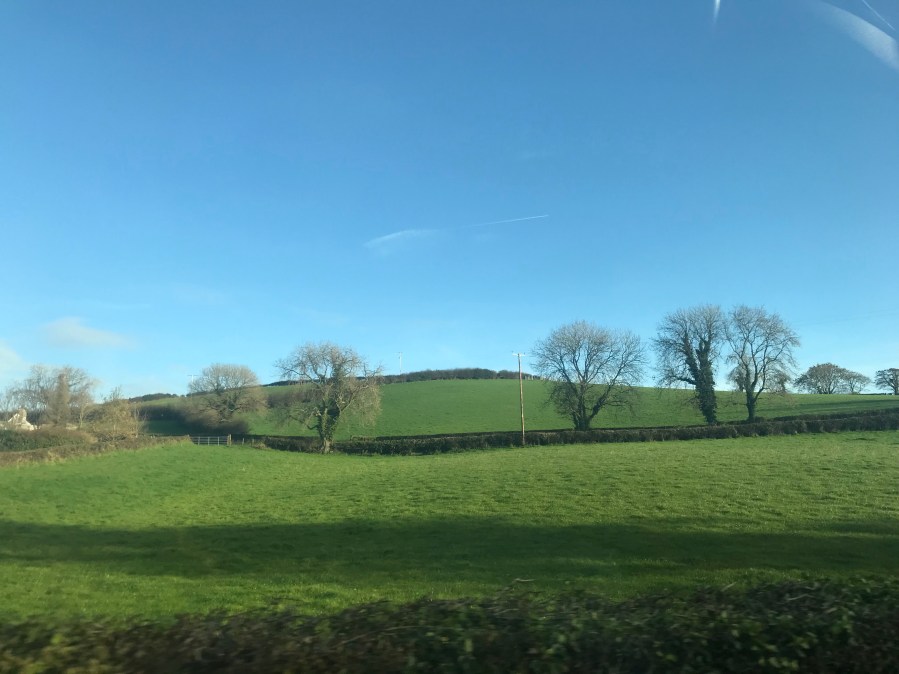 WHAT WE ACTUALLY ENDED UP DOING
– The car hire places in the city didn’t open until a bit later in the morning, and we wanted to get started early, so we caught a bus from city (we stayed near Dublin Cathedral and there was a pick up point just around the corner) to airport to collect car. This was going to be cheaper than a taxi, and cost us €7 each – just have correct change ready to pay for your tickets!

– We picked up the car at 7.30am and got started without any issues – navigating was pretty easy, thankfully!

– First stop was Castle Ward, the site of some of Game of Thrones’ Winterfell scenes. A beautiful 18th Century mansion sits on the enormous grounds, which were something else when we visited – autumn leaves + castle grounds = magic. We only saw two other people on our way in, both groundskeepers. And the lovely lady working in the bookshop. Otherwise, we were the only visitors. It may have been because it was low season there was no one there to take our admission fee (£8.60 per person), and we didn’t actually go into the mansion, but instead we wondered around and enjoyed the gorgeous grounds in peace. Great idea heading there first! 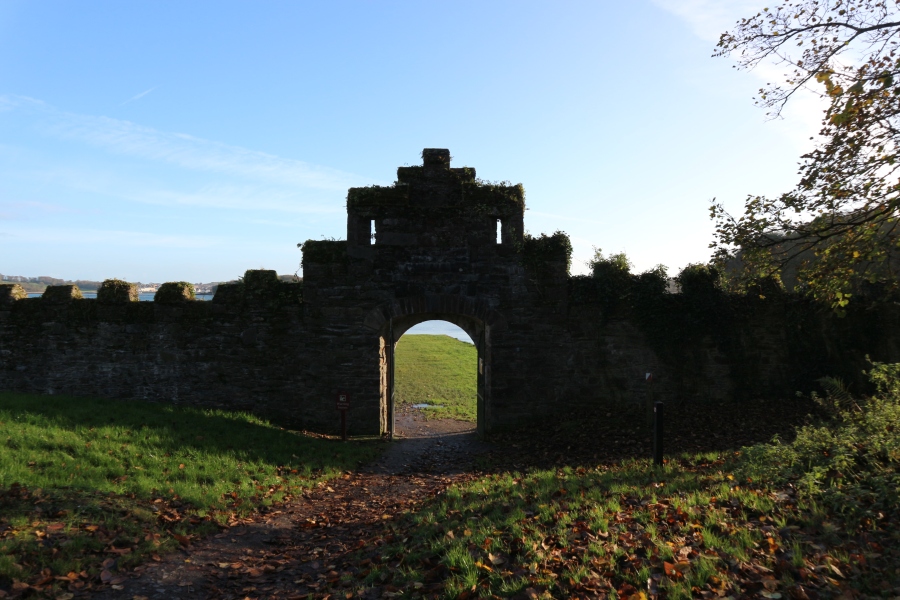 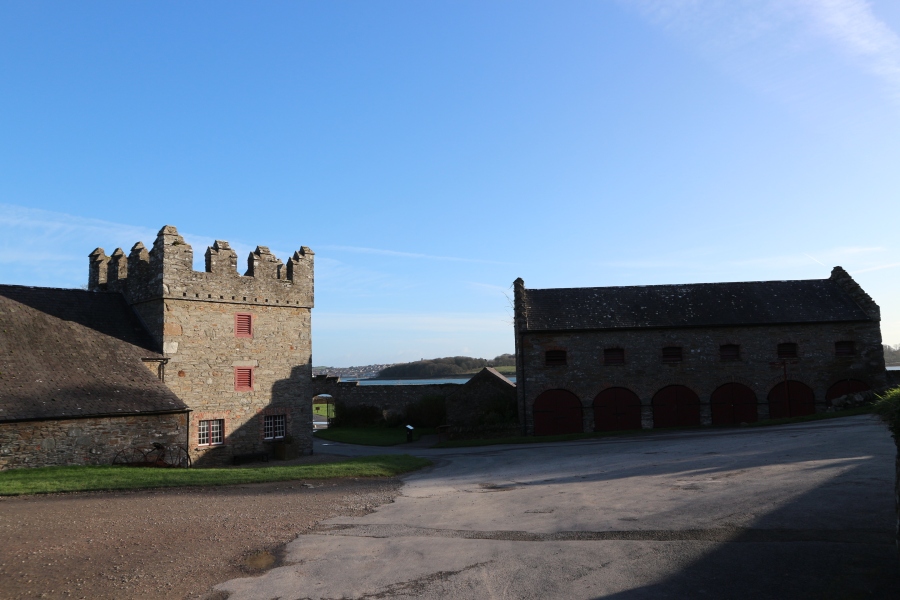 – The Dark Hedges was our next stop, which starred in Game of Thrones as the King’s Road. I guess we were lucky that the weather played it’s part – it was grey and overcast and a little somber when we arrived, so it looked even more dramatic and foreboding (even though they’d recently been pruned and the branches remaining were losing their leaves because we were there in November). What you don’t realise from the photos is that it actually is a road. Lots of people walk it. And plenty of cars will drive up and down in while you’re trying to take your lovely photo. There’s nothing else around it, either, so if you’re just going to get the shot, you’re probably going to be a little frustrated! We took a few snaps in between groups, but honestly, it was just really cool to walk to walk through these giants planted back in the 18th Century and look out over the fields alongside them! 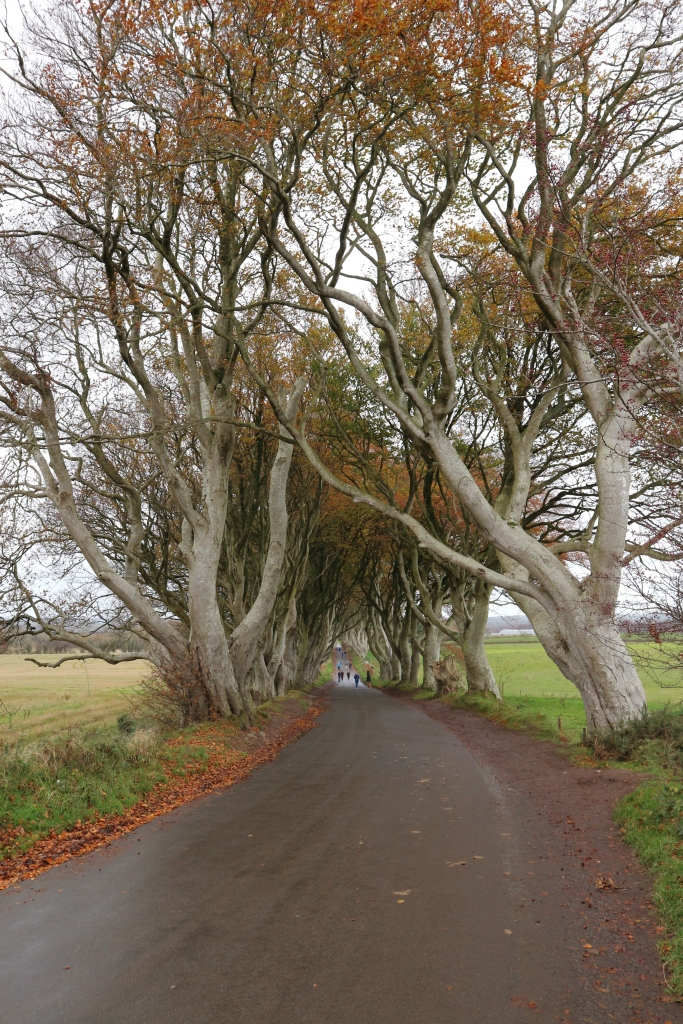 – By the time we got to Dunluce Castle, the weather was really starting to take a turn. The wind was enough to almost knock me over while I stood near the cliff edges to take some photos, and the water below was furious. That’s the only word I can think of to describe it; absolutely, viciously, furious. But it was stunning – even when you can barely stay on your feet, looking at this ruined castle up on the cliffs is a pretty incredible experience. Because the weather was getting so nasty, we didn’t stay long – we physically couldn’t, the wind was so strong! We were also getting pretty hungry, so we moved on to our next stop to wait the wind out a bit… 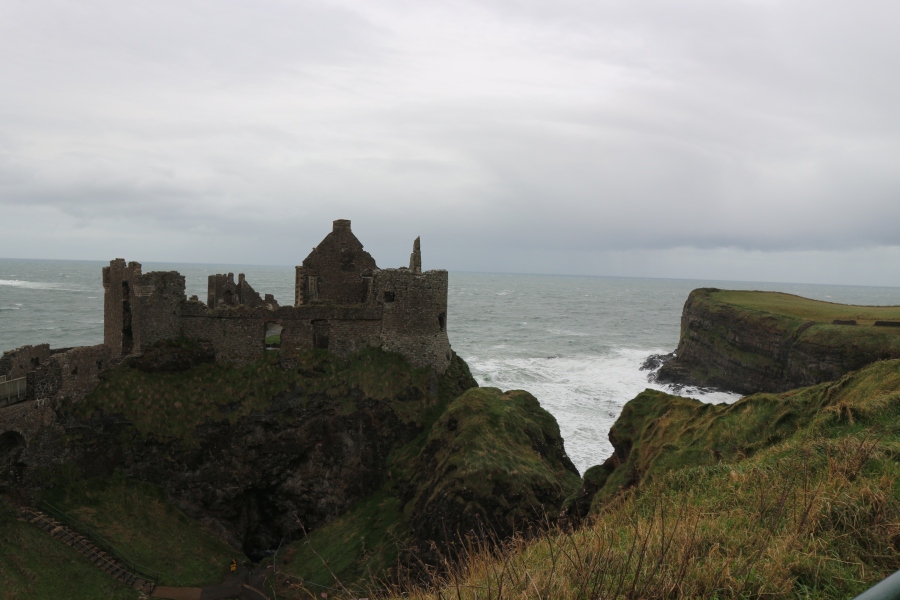 – … at the Old Bushmills Distillery. Irish whiskey is meant to be some of the best in the world, and husband is a whiskey man, so off we went! We didn’t really want to spend the time doing the tour (we’d just done the Jameson Distillery tour the day before and it set the bar far too high!), so we thought we’d just have a bite to eat and maybe try a few of their whiskeys. Lunch at the café was a great, quick bite, but husband decided that sampling would be a waste of time and money; he’d already tried one of their whiskeys, and there was only one other he wanted to try; he ordered that after lunch, and was suitably impressed. By then, it was starting to get a bit later in the afternoon, so we jumped back in the car.

– Giant’s Causeway was to be our final stop of the day. And despite the horrible weather (it was starting to rain at this point, on top of the torrential winds), it was super busy. 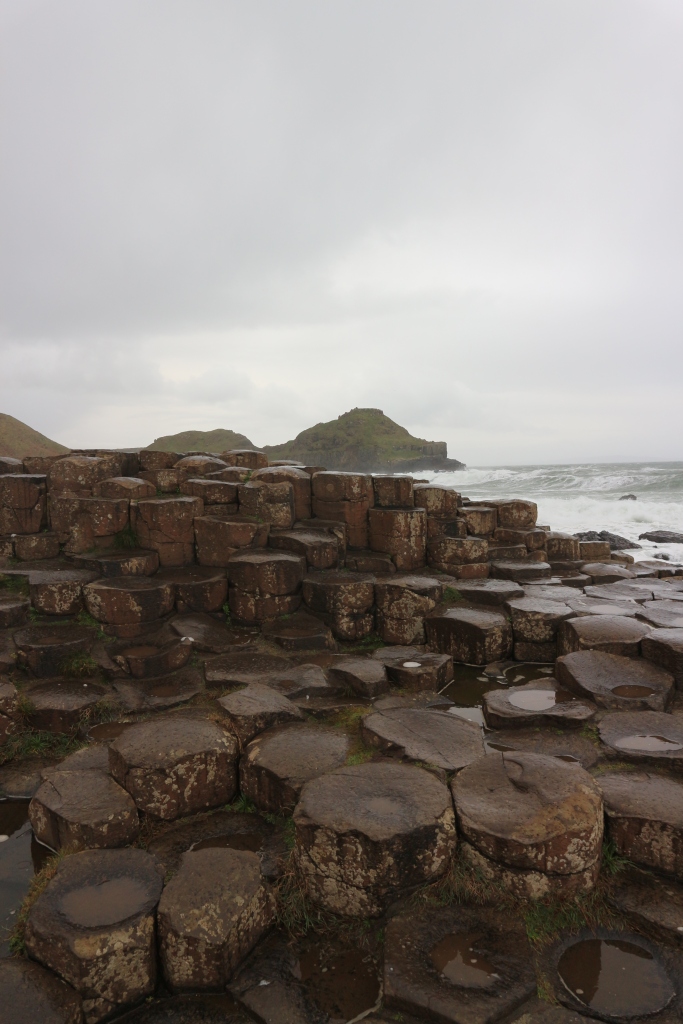 To be honest, it wasn’t the wonderful experience I imagined it would be, for a few reasons:
* The Giant’s Causeway itself is a natural phenomenon. You’d think that would make it available to the public. You’d be wrong. The National Trust let you know once you’re already there that you can visit it for free, but you have to pay for parking. Given there’s no where else to park in the general vicinity, the extortionists are making a bundle from car parking.
* There were tour bus-sized hoards of people there, who were clearly there for no other reason than to take photos for social media accounts. To the point that I had a middle aged woman try to shove me out of her photo. Yup. All of this natural beauty and magic has been reduced to the perfect Instagram shot, and that took a LOT of the experience away for me. We’d come all that way and been forced to pay our parking, so I made my way out onto the stepping stones to check it all out a bit more, but that feeling of “wow, how incredible” just wasn’t there. 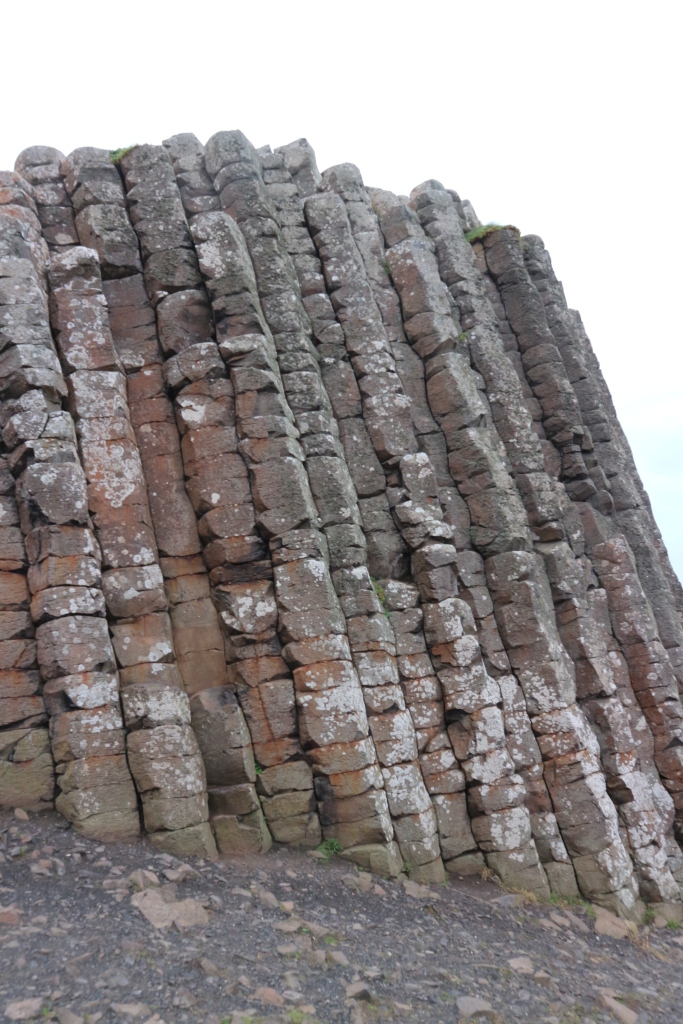 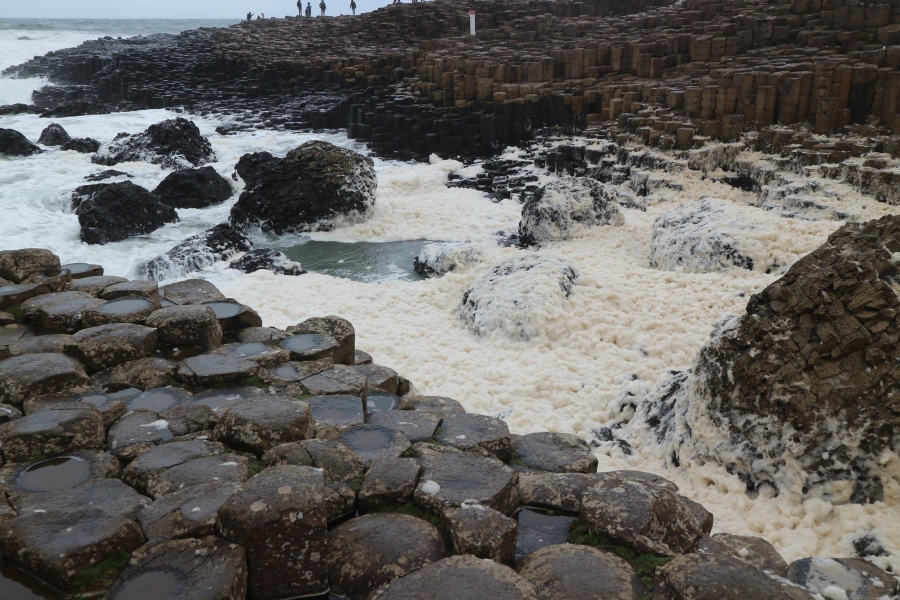 Given that experience, I’m actually not sure I’d recommend visiting too strongly, but the rest of the stuff we saw was fantastic! By the time we finished up at Giant’s Causeway, the rain and wind were both getting heavier, and we were conscious of having to drive back in such crappy conditions in the dark, so we decided to cut our loses and make our way back to the airport to drop off the car by 7.30pm. I guess Dunseverick Castle and Ballintoy Harbour will still be there for our next visit!

CAR HIRE TIPS
– We used Dan Dooleys and they were fantastic to deal with from start to finish! On the day, we went to their airport office, fixed up the paperwork, and  used their shuttle to take us to parking lot (which is the same location the car was returned to).

– There is an Applegreens about 10km from airport where you can stop to fill up fuel.

– I’d highly recommend getting a small car for the narrow Irish roads!

– We went in November, and it gets dark early at that time of year, so you’ll need to be prepared to drive in the dark.

– Pack snacks and water! You’ll be travelling mostly on expressways, so there are not many stops unless you want to turn off.

– Have money ready for the toll booth – they weren’t expensive, but the booth attendants will like you a whole lot more if you have some change on you!